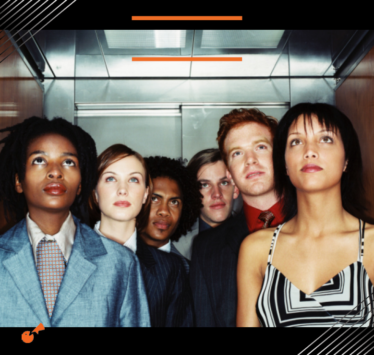 What do other people do?

When we are in new or different situations and are unsure what to do, we will often look to those around us – including strangers – to provide cues on how we should behave.

This is a natural instinct of ours since we’re a herd species.

Acceptance and belonging is very valuable to us, and conforming to the herd provides comfort and security. This also means we actively avoid situations that could result in being ostracized from the herd.

It’s the feeling of: if most people are behaving in this way, in this place, then I should probably do the same.

Using social norm messages, like descriptive norms, can help provide those behavioral cues for our audience when there aren’t other people around to observe or when the desired behavior isn’t highly visible.

Yet, it’s not as simple as just telling our audience what other people are doing. There are nuances in how we message these norms, which greatly impact how well the message works to motivate change.

Of course, when dealing with humans and behaviors and messages, it’s never simple!

One of the best examples of using descriptive norms comes from a research project that tested the effectiveness of different messages on motivating hotel guests to reuse their towels.

The most successful message was: “75% of the guests who stayed in this room participated in our new resource savings program by using their towels more than once.”

This message performed better than one focused on saving the environment, and better than messages that referenced other social groups like hotel guests more generally, fellow citizens, and specific genders.

It works for two main reasons:

1) It focuses on a specific context and behavior: other guests, who stayed in this same room and were faced with making the same decision as you, chose to reuse their towels at least once.

This establishes a precedence that can be easily followed, tapping into our desire to follow the herd.

2) The percentage of people doing this behavior is high: “75% of people” translates to “mostly everyone” in our minds (a.k.a. the herd).

This creates a high risk and low reward scenario for going against the norm, even if other people won’t see us doing the opposite behavior – tapping into our fear of being ostracized by the herd.

It comes back to: if most people are behaving in this way, in this place, then I should probably do the same.

Amazingly, I’ve never seen this messaging approach adopted by hotels in the real world. I’m not sure why.

For your own messages, consider using descriptive norms when you have high adoption and compliance rates already (like 75%) and the goal is to ensure that new audience members, who have not been in that setting or situation before, know what behavior is expected of them.

This approach does not work as well when adoption rates are still low.

So, if you’re trying to start or grow a new behavior, then it’s best to avoid making the following descriptive norm mistakes and instead explore a great alternate option called dynamic norms. More on that below.

Descriptive norms do not work when we showcase the large percentage of people doing the behavior we are trying to reduce.

Take this sticker for example, it tells us that “70% of members use more than 1 towel per visit.”

Yet, they want us to use only one towel. 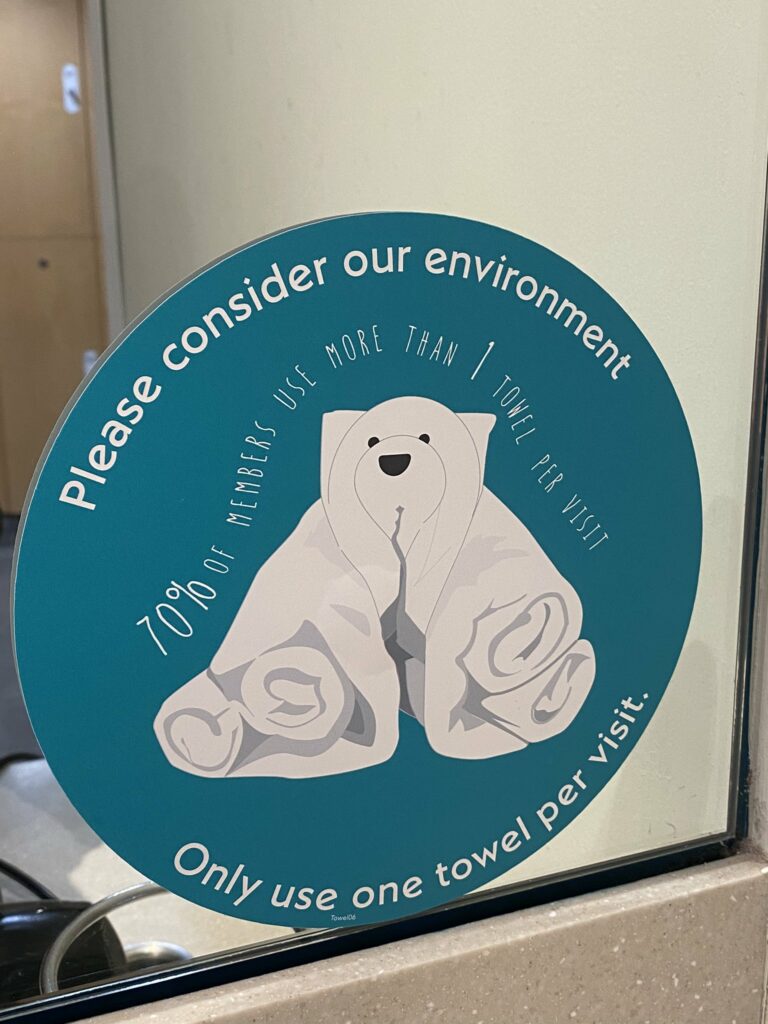 This communicates to me that the most common behavior in the gym is to use multiple towels.

So, if that’s what most people are doing (and 70% is certainly most), then why do I need to be the one to use fewer towels???

Most people aren’t looking to be the single change maker in the herd. That’s not a comfortable place to be. The preference is to seek safety in numbers and do as others do.

Yet, this sticker is asking individuals to go against the norm and be different.

And for what purpose are we asking them to take this large social risk??? Oh…that’s right…to please consider the environment. (I’m booing out loud at this right now).

On the flip side, let’s say I am part of the 30% of gym goers who uses only one towel per visit: I see this sticker and suddenly I question why I’m being so frugal with my drying behaviors! If most people use more than one towel, then so can I – without guilt.

Not only does describing the wrong norm not work to motivate new behaviors, it also risks creating a backlash effect where current do-gooders decide it’s not worth the effort, and then towel use rises overall.

This brings up the question: would it have been better for the sticker to say “30% of members use only one towel”?

Lacking numbers for a norm

It can be a natural instinct to want to show the number of people who have adopted a behavior, even if it’s not yet the majority.

For example: “28% of all customers buying seafood in our shop yesterday chose MSC/ASC.”

While it may be interesting for viewers to see and know this data point, it likely won’t prompt action for two reasons:

1) It creates a perceived difference between doers and non-doers. If only a sub-set of the audience is doing the behavior, then the perception of this group (the 28%) is that they are different than me.

It’s easy to assume they’ve been doing this behavior already for a long time, that they’re more passionate about this topic (maybe even a bit “extreme” about it, as a negative slant), or that they have different values, priorities and interests – demonstrated by the fact that they went ahead and made this change already.

In essence, those 28% of people who do this already must not be like me. Maybe they’re part of a different herd.

This reaction is related to fads versus trends and the diffusion curve, where those in the early and late majority may be wary of jumping on a trend too early.

Even though this approach did not repeat the mistake above of promoting the wrong norm, it does suffer from having a low social proof point, which doesn’t tap into our desires to conform to the herd.

More and more people are using dynamic norms instead!

That headline is misleading, although it is my wish.

Dynamic norms is a great messaging option when rates of adoption are currently low, yet are trending upwards towards a movement.

It’s an approach of communicating that the status quo is starting to shift, and a growing number people are trying to make a change.

Here’s an explanation of how and why it works by Gregg Sparkman, who has been actively researching and testing dynamic norm messaging:

“So instead of saying X percent of people don’t eat meat, which is the static view, you highlight the fact that a growing number of people are choosing meatless meals,” he says. The hope is that the audience will think, this is the way the world is moving, and I want to keep up with the times — thus conforming in advance. > from Insights by Stanford Business article

In essence, it sends a signal that the herd is likely to move in a different direction and we should get ready to join; avoiding the pitfalls associated with promoting small rates of adoption I highlighted above.

This approach can be used for many of our efforts that fall into the category of “behaviors starting to change.”

Personally, I think this is a fascinating approach that warrants much more application in our work. It gives us the ability to highlight new and growing movements in an inviting, exciting, and honest manner.

I recommend reading the full article about the dynamic norms research here as it has a number of lessons learned and its own set of nuances to consider.

“If you don’t want to be deceptive, static norms are only useful in certain domains” — namely those where, by definition, most people are already on board. “Dynamic norms apply to many more things, especially where you want to get large-scale social change.” > Neil Malhotra, the Edith M. Cornell Professor of Political Economy at Stanford Graduate School of Business, in the same Insights by Stanford Business article.