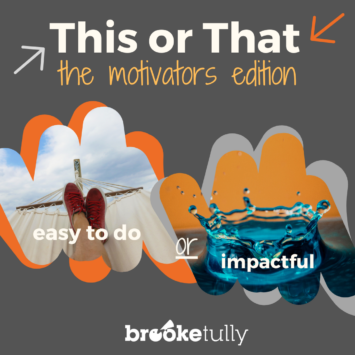 This or That: Easy To Do or Impactful?

This or That: Easy To Do or Impactful?

This or That:  The Motivators Edition

In this series, we’re exploring why one motivator may work better than another to spark action in a specific behavior change scenario.

Scenario 4: Conserving water when in a drought

The behavior change goal: We want California residents to reduce water usage at home during periods of drought. Specifically, we are asking individuals to shorten the length of their showers by 1-minute.

Conservation benefit: California is on the frontlines of climate change as they battle increasingly severe wildfires, droughts, and heatwaves. While year-round conservation actions are helpful, extreme weather incidents require residents to go a step further to mitigate the impacts.

The average showerhead in California releases 2 gallons of water per minute. If 1 million people take one minute off their shower time, then collectively a municipality can save 2 million gallons of water a day (East Bay Municipal Utility District).

Learn more about the challenges California is facing and the proposed solutions here. And if you’re in the mood for some serious doom-scrolling, then check out this article on the coming California megastorm. Yikes.

Target audience: Households in the East Bay area of California who are currently under a drought emergency with district-wide orders to reduce water usage by 10%.

Deterrents: What can make the behavior of shortening showers difficult for this audience to do?

» Time accounting. Bathrooms – and especially showers – are typically void of watches and clocks. How does one know if they are reducing their shower time by a minute when there are no obvious means of measuring time while in the shower?

» Loss aversion. A shorter shower sounds like a less enjoyable shower and that triggers our instinct to avoid experiencing a loss. Will I still feel clean, refreshed, and restored with less time in the tub?

» Skepticism. We saw this deterrent in the previous scenario on petition signing and it applies here as well. When individual actions sound too small to make a big difference, then the audience will question if the request is real, important, or urgent.

There are other possible deterrents for this scenario, but let’s stick to these three for the exercise.

THIS: EASY TO DO

How it works: Making the behavior easier to do and highlighting the easy factor lowers barriers of status quo bias and fear.

How we could use it here: We can offer simple ways of timing one’s shower by offering tips and tricks (e.g. “turn off while you suds up”) or by providing timing devices to keep in the shower.

How it works: Showing proof of the impact individual actions are having on a larger issue validates the time and effort it takes.

How we could use it here: We can highlight how much water is saved collectively when everyone reduces their showers by one minute and showcase how much water was saved during previous droughts.

How it works: Related to tangible and intrinsic benefits, this method highlights how the action and outcomes benefit the audience member personally.

How we could use it here: We can highlight how much they save by using less water or make the act of shortening their showers into something that is either fun to do or a source of pride.

Which would you choose to get the audience to shorten their showers: this, that, or the third???

That’s right, I added in a third option this time to keep you all on your toes.

But I won’t leave you hanging this time.

I’m going with… ALL OF THE ABOVE!

In previous scenarios, we’ve seen how a combination of motivators can be powerful, like adding belonging to social proof for No Mow May.

For this final scenario, I was inspired by my co-presenters at the Water Conservation Showcase who have first-hand experience motivating water-saving behaviors in the East Bay and San Francisco areas.

Their outreach campaigns do a great job of making shorter showers, and other actions, feel easy, fun, impactful, and personally meaningful. A powerful combination of motivators.

They selected their top 10 shower songs representing a variety of music genres and ran ads on Pandora promoting the water savings one can achieve if they time their shower to the recommended songs.

Listen to one of the ads by clicking on the image below.

The text reads:
“California is in a drought and we need to make every gallon of water count. If we all shorten our showers by one minute [EASY TO DO], together we can save two million gallons a day [IMPACTFUL]. How? Time your shower to music, like Digital Underground’s “Same Song” which runs four minutes [EASY TO DO & PERSONAL]. That’s an eight-gallon shower [IMPACTFUL].”

Those few sentences do a great job of incorporating all three motivators.

Over the span of two months, this series of Pandora ads reached nearly 150,000 listeners and had 630 clicks to their drought website.

The Great Outdoors
Adopting a different strategy, the San Francisco Public Utilities Commission focused on outdoor water waste as homeowners have a tendency to increase water usage during hotter months to keep lawns and plants healthy.

The campaign did a nice job of making the behavior easy, impactful, and playful. They also received a big boost when the local baseball team joined the initiative as an official partner.

“Be Water Saving Giants” adds two personal motivators: (1) being associated with your favorite team and (2) instilling a sense of pride in saving water.

In the first 6-months of this campaign (before the San Francisco Giants joined), the organization achieved a five-fold increase in website visitors, double the amount of requests for water conservation services and devices, and a 9.6% decrease in household water use.

That’s not just a drop in the bucket. (Bad Dad joke…I know!)

I hope you enjoyed the final installment of This or That: The Motivators Edition.

If you want to learn more about adding motivators to your outreach efforts, then sign up for the ‘Creating a Conservation Movement’ newsletter. Not only will you get two emails a month with insights and ideas like the above, but you also get exclusive access to my webinar on communication techniques that motivate action.