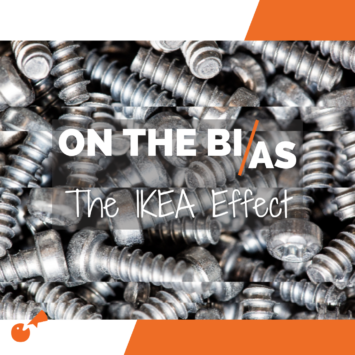 ON THE BIAS: The IKEA Effect

ON THE BIAS: The IKEA Effect

Introducing the next blog series: ON THE BIAS.

Over the next 4 posts, we’ll take a look at cognitive biases we have as humans and how they impact our behavior change efforts.

A story: the dresser that must come with us

Last year, when we were getting ready to move to a new house, we had to make decisions on which pieces of furniture to keep and which to donate.

When it came to our bedroom furniture, I was enthusiastic about donating his dresser and adamant about taking mine to the new house (the one that I brought into the relationship).

Because of this, my husband Gabe assumed my dresser was a quality piece of furniture that had value.

On moving day, when the movers turned the dresser around, exposing the flimsy particle board backing, Gabe looked at me with a judgy face and asked, “that’s just a crappy dresser, why were you so adamant about bringing it?”

And the answer is…because I built it!

The dresser looked really cool online and stated that some assembly was required. Little did I know that it was going to show up as a hundred separate planks and I would have to essentially build a dresser from the ground up. Two hours later, and with my dad’s help, I finally had my cool dresser.

That is why it’s here with us in our current house.

The strong feelings I hold for my crappy dresser are a result of the IKEA Effect. Aptly named after the store, this bias describes the fact that we place greater value on items we have helped build.

If I had purchased a higher quality dresser, then it would have had greater value to me economically in terms of resale value and longevity. Yet, the dresser I bought from Target (not IKEA, actually) holds greater emotional value because I put sweat, elbow grease, and yes, some tears into it.

Related to this bias is the Endowment Effect, which is when we place greater value on something we own, even if we did not help build it.

Bringing the bias home: Take a walk around your house and explore which items you have an emotional attachment to and why that attachment exists. Consider if those feelings stem from the IKEA effect or from the Endowment effect.

If there are items that you do not have an attachment to, explore why that sense of ownership or emotion does not exist for those items. (Hint: your partner or someone else likely brought those things into your life.)

How this bias can help or hurt our behavior change programs

The beauty of this bias is that it opens the door for co-creation: involving members of your target audience in various steps of the project.

As audience members get involved in shaping solutions, designing plans, and implementing activities, they begin to place greater value on the program. The result goes way beyond emotional attachment, it leads to important stakeholders having a vested interest in the success of the project.

In the near-term, co-creation establishes stronger ideas, collaboration, and relationships.

In the longer term, it can be a key ingredient to sustainability when the audience or community take over ownership of the program.

There are many ways to incorporate co-creation into a program. Consider including it when you’re:

HOW IT CAN HURT

This bias can hurt our efforts when we show up with all our plans, solutions, and activities fully baked before involving or consulting the audience. Sure, the audience may accept the project, just as we would welcome a well-built, quality piece of furniture, but they may not care about it that much.

This may leave implementing organizations carrying the burden of constantly showcasing the importance and value of the work they’re doing without the audience adding their voice to the mix.

In the worst-case scenario, a lack of involvement by the audience can lead to pushback and resistance. This happens when solutions feel like they’re being forced upon them, or if concerns about the program go unaddressed because there isn’t room to adjust the plans.

Think of this as receiving a damaged, poorly-built dresser that you didn’t ask for, you don’t believe you need, and you can’t return. Yuck.

If you are experiencing conflict in your program, then this post may be helpful.

A NOTE OF CAUTION

The IKEA effect has an important threshold to be mindful of. Asking the audience to build too much, or making it too confusing or difficult to build, can produce an adverse effect – like giving up!

The dresser I received came close to that threshold as it took much longer to build than I would have expected. If the instructions weren’t clear, then I would have hated the dresser and the company for putting me through such a terrible experience.

To avoid tipping over this threshold, include the audience but don’t dump it all on their shoulders, and give clear guidance for how they can provide input and get involved.

I hope you enjoyed learning about one of the many ways we’re wired.