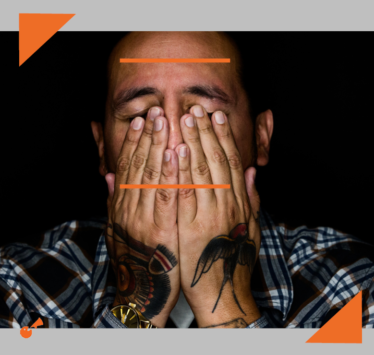 There’s no SHAME in my game

There’s no SHAME in my game

Can shame be used to motivate change?

Increasingly, I receive this question.

At first, the question was sparked by mainstream coverage of the Swedish term “flygskam”, which means “flight shame” and was created 2 years ago to encourage people to take fewer flights.

Today the question comes up more frequently as we witness public shaming around mask wearing, physical distancing, socializing, and more, during the COVID-19 pandemic. (This article in The Atlantic does a wonderful job covering this topic.)

Before I get into my point-of-view on the question, let’s explore what shame is.

Shame /SHām/ Noun: a painful feeling of humiliation or distress caused by the consciousness of wrong or foolish behavior. Verb: make (someone) feel ashamed.

To bring this to life more, I like how this article in Scientific American described shame.

“We feel shame when we violate the social norms we believe in. At such moments we feel humiliated, exposed and small and are unable to look another person straight in the eye. We want to sink into the ground and disappear.”

It certainly isn’t a positive emotion.

As you may know by now, I’m not a fan of using negative emotions (like fear) to motivate action.

Yet, I get the logic behind considering shame for this role: if our audience feels bad enough about their actions, then maybe they will want to resolve and fix that feeling by changing their behavior.

While that rationale may hold true, it’s an entirely different thing to consider and ask: should we make our audience feel bad and ashamed about their actions?

Shame is best served by peers, not organizations

Let’s say you’re a person who litters from time to time.

You do this when you’re out with a friend and they respond with, “Hey! [elbow jab] That’s not cool. Pick it up and we’ll throw it out when we get back.”

Your friend may even pick up the litter themselves and carry it back.

This brings you shame.

You’ve been called out for violating a social norm your friend believes in and is upholding in your presence.

You likely won’t do that behavior again (at least, not around that friend).

You may even get called out by strangers you don’t know, either in-person or on social media, and that brings you shame as you feel like you’ve broken the social contract of what appropriate behavior is – and you didn’t mean to.

You didn’t realize littering was such a bad thing to do, but now you definitely won’t be doing that anymore.

This doesn’t look the same when it’s coming from an organization.

When an organization shames you, it’s not an elbow jab.

It’s not a reminder of social norms you’re expected to follow. It’s not peer enforcement or reinforcement.

It doesn’t pose the same risks of becoming ostracized by peer groups you belong to.

Instead, it comes across as finger wagging.

Which, in turn, makes most people rebel against the message (Marketing for Change covered this well in their blog on the Reactance Effect).

When this approach isn’t turning people against you, it’s turning them off instead.

Mainly because the tone we use when shaming people doesn’t come across well. It looks like this: 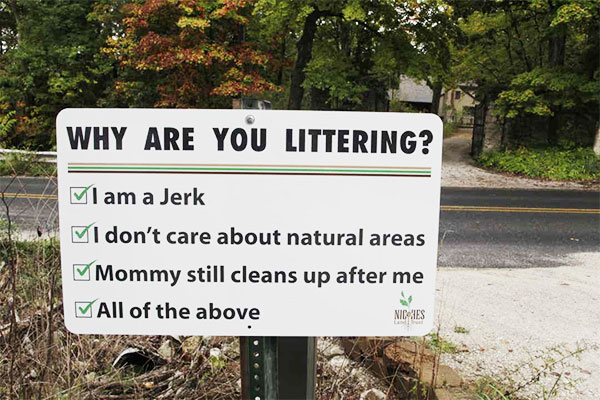 Even as a non-litterer, this sign pisses me off.

As a behavior change communicator, it REALLY pisses me off.

This sign is reaching folks who are spending time outdoors in nature.

The same audience we’re trying to connect with and engage for the long-haul.

The same audience that we need to do 100 things to help protect the planet.

THAT’s the audience we’re talking to here. And we’re telling them that they’re jerks?!?!?

Why would we do that?

We don’t need to make people feel shame, they already do

Beyond the fact that this communication approach isn’t going to win over audience members, the reality is that people don’t need our organizations to shame them.

They are already carrying a good deal of shame with them.

This existing eco-shame leads to a growing number of online searches for ways individuals can reduce their carbon footprints, adopt more eco-friendly habits, and switch to more sustainable purchases.

And it’s leading to more actions taken to reduce their individual impacts.

Here’s an example of steps people are taking to avoid single-use plastics (by the Shelton Group; the full report can be downloaded here).

Yet, it can be really frustrating when you’re trying to do the right thing, but you run up against systemic obstacles that make it nearly impossible (like trying to avoid plastic packaging when shopping in a big-box grocery store).

Even when it’s not the consumer’s fault, they still carry the shame since they want to do better.

What they need is help avoiding and reducing the shame they’re feeling by providing better, more sustainable options. Like:

» Creating and providing refill stations to reduce single-use plastics, like Nestlé is piloting.

» Proactively getting rid of unnecessary plastic in packaging, like Barilla’s new move in the UK.

» Creating a low impact website for shopping, the way Organic Basics has done.

» Suggesting alternate forms of travel (train instead of plane) & ways to reduce your impact if you must take a plane, from an airline itself: KLM Fly Responsibly.

So, rather than spend our efforts making our audience feel shame, let’s use those resources to direct them towards choices, habits and actions that will help them shed the shame.

But that’s just my 2cents on the topic 😉