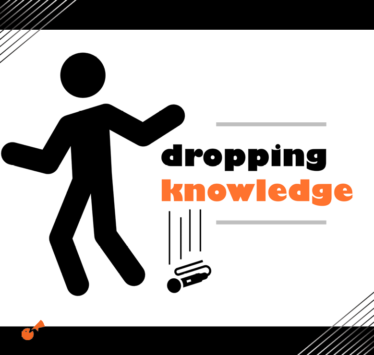 I tend to be pretty adamant that, in MOST cases*, knowledge does not lead to behavior change.

In fact, I often argue that knowledge doesn’t even have to be a precursor to making a change. See my article here on how we operate in a see » do » feel format, not a know » think » do one.

But that does not mean there is no role for knowledge.

I believe knowledge plays a critical role in helping to sustain a change effort once it’s already begun.

What prompted me to think about this are a few lifestyle and activity apps I’ve used. Namely Weight Watchers, Strava, and that f’ing!! app that connects to my scale.

At one point or another, I downloaded these apps when starting a new wave of efforts to lead a healthier, more active lifestyle.

Knowledge of my starting point

This one may seem obvious, but I was surprised at the critical role it played in my endeavors.

Certainly, I knew the basics of my starting points: I wasn’t exercising regularly, my portion sizes were too large, and my pants weren’t fitting the way they used to.

These were the same reasons why I was looking to change my habits to begin with.

But the truth was that I had no idea where I was truly at with any of these things. And that has a lot to do with my own biases – my memory conveniently fails to remember how often I eat treats or the last time I exercised consistently.

The first thing these apps did was tell me where I was starting. Weight Watchers showed me how many points I consumed in a regular day. The scale informed me of my current weight.

I got a crystal-clear picture of my starting point.

And with that knowledge of my starting point, I could pinpoint more specific changes that need to be made and set more realistic goals for myself.

Knowledge of my progress

It’s great to know when I’ve achieved my desired goal, but there are a lot of steps that happen between the starting point and the goal.

Knowing the progress we’re making towards our goal provides a huge source of motivation to continue our efforts.

Strava does a really nice job of tracking your run/bike trips so you realize how often you’re exercising and where you’re making progress with speed.

They even throw in some wonderful recognition by giving you achievement trophies when you’ve beat your previous time. All of it done to encourage you to keep up the good work.

It can be easy to lose motivation and optimism when starting something new.

Knowledge of the progress can be helpful to celebrate the wins along the way and set more feasible goals based on previous performance.

And without this information, we may not even be aware of the incremental progress we’re actually making (again, because of those biases).

Anytime we ask people to adopt new habits, we’re asking them to embark on a journey of change.

Motivating our audiences to start the change is hard to begin with, and exciting when we’re achieving that goal. But that isn’t yet the end goal.

We also need to explore how we can help our audience throughout the journey – after they’ve taken the leap to start – by providing knowledge at critical points.

These types of feedback loops play a big role in positively reinforcing their efforts in order to sustain momentum and motivation. For challenging behaviors, positive reinforcements and validations are best served up frequently and consistently.

So how can we add feedback mechanisms into our programs?

Technology can play a big role here. There’s a growing field of companies creating apps for nonprofit organizations designed to drop knowledge in these ways (and gamify it when appropriate).

Maybe we can create apps and reminders that track the amount of meat eaten in a week, the number of fish caught, the amount of paper tossed and not recycled, and so on.

Or you can take a more analog route by providing feedback through printed materials (like the door hangers used in this study) or interpersonal activities like meetings and workshops.

As an example, check out this report on how FICO scores are encouraging better financial habits.

This study aims to show that knowing your current credit score helps overcome our natural overconfidence bias (knowledge of starting point) and then provided guidance for making your score better (knowledge of progress).

There are cases where knowledge can directly lead to action. This happens when you’re speaking to an audience that is already committed to making change for a cause (in other words, when “preaching to the choir”).

Like when you’re speaking with other conservationists. For example, I only needed to see one credible article on the plastic straw issue before I was convinced to change my behavior and took the necessary steps in my life to do so.

But we don’t represent the masses on issues like this – so while knowledge may work for me and other early adopters, it won’t catalyze the type of movement we ultimately need.

The need for agility
Demographics tell an incomplete story
Fads versus Trends
Share on: